The political issues that people care about are so different. I guess that in North America and Europe they are very concerned about racism. Feminism is quite a big deal there too, the number of women CEOs and whatnot. I studied humanities in university in Toronto, Canada, and that was a lot more feminist-oriented. So I guess this constructs the world I’m in, or almost like what I’m supposed to focus on. But traveling here to Tokyo, and coming into a different cultural zone, I feel like the focus shifts. For example, people here focus a lot more on China and national security. Military and pacifism issues are a big deal. Like, is it a good idea to have soldiers? And I never had that discussion in North America. That’s not something that people really talk about in Canada.

You cannot focus on like 100 different issues at the same time; maybe just a handful. And that’s one of the reasons I love to travel: It kind of gives me a little bit of freedom in my thought process. And it helps me decide what I want to focus on more within the broader set of problems. I think that people should pick what issues they feel drawn toward personally; not just what they see others getting angry about on the news. This is the way that I like social issues to be solved. 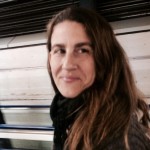